Au contraire, our approach to Jesus’ baptism site in Jordan three months later, was a simple test of audacity and a smile.

We’d spent the bulk of the day at play. First we visited the mosaic artist Samaher Khameis at her workshop in Madaba. I feature Samaher in my short film on Madaba’s Institute of Mosaic Art and Restoration. It’s fascinating to see how this intricate art form in process and to imagine men and women tooling over tiny pieces of stone millennia ago. What a legacy – what stories! – they’ve left behind. (Once the invoices for that project are honored – and that’s another story -- I will put up the piece for you to see.) 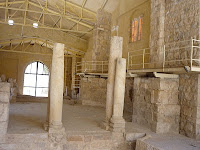 Of course we made the mini-pilgrimage to St. George's Church to show Janna the map and went again to gape at the mosaics in Hippolyta’s Hall (pictured) at the Virgin Mary Church.

Then we drove the long, narrow and winding roads south out of Madaba to Hammamat Ma’in – to the natural hot springs of Jordan that rush from the cliffs of the mountainside above the Dead Sea. 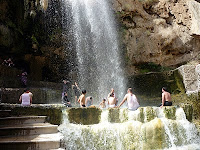 Like the Esalen Institute in Big Sur, CA, Jordan has three waters coming together: salt, fresh creek (as in Wadi Mujib), and hot: Ma’in. At Hammamat Ma’in the main waterfall ranges in temperature from 40° to 60° C (104-140° F).

Imagine the power of that water pounding down on your shoulders: hot, heavy, relentless; healing, soothing, invigorating. 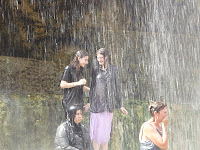 We wore swimsuits with tee shirts and shorts over top. Nearby were women in long dresses with headscarves, smiling and laughing in the spray. There was one man, French, we thought, in a Speedo.

They say King Herod frequented the healing springs at Ma'in (when these waters were known as Baaras) and built a villa at nearby Mukawer. According to tradition, it was at that villa that Salome danced and John the Baptist was beheaded (Matthew 14: 1-12). 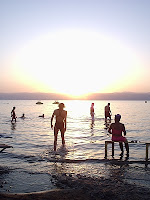 Speaking of John the Baptist … to the point of this letter.

We left the Hammamat via the other route: by the Dead Sea. Winding down the muscular mountains with a broad view of both our side of the Dead Sea and theirs. Every time I take in that view I am in wonder: it all looks so peaceful, unified; the land around a lake. Then I remember the contested ownership, the lines, imaginary and real cutting through towns, cultures, salt water, and the trickle called “the Jordan River.”

“Let’s go to the Baptism Site,” suggested Katie, as we turned north with the Dead Sea on our left and the mountains that hide Ma’in on our right.

The signs are everywhere. Tourism – adventure and spiritual – is business for Jordan and the signage is good. So are the roads.

We drove past our favorite Dead Sea swimming spot, Amman Beach, and all the big hotels. Then we turned left toward the world’s widest partition and drove through the no man’s holy land to a simple entrance arch where three men were enjoying tea and an early evening chat.

“Marhaba (Hello). We’d like to visit the Baptism Site.”

After discussing the schedule (8am – 5pm) and the entrance fees (seven JOD per person) I smiled and asked, “Can we see it anyway?”

Within a few minutes we arranged with Emad that we’d pay our entrance with all the dinars we had (16) and that we’d drive him to his home afterward (on the road to Amman) and he escorted us to and through the site, Bethany-beyond-the-Jordan.

According to www.sacred-destinations.com, excavations on the site -- on the east bank of the Jordan River -- only began here in 1996, following Jordan's peace treaty with Israel in 1994. Land mines dotted the infamous and disputed border along the ever-shrinking river. 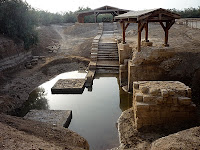 It took two years to make it safe. Since ‘96 more than 20 churches, caves and baptismal pools dating back to the Roman and Byzantine periods have been uncovered.

You still feel the tension as you approach the Jordan. After guiding us on cool wooded paths to the pools that scholars agree may be where Jesus Christ was baptized by the Prophet John, Emad told us, “I cannot go any farther. The Jordanian soldier will take you from here.”

And a military man stepped forward, gesturing us toward a simple gazebo-like structure with stairs down to the Jordan trickle and the Israeli flag in clear view. 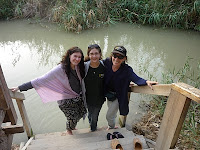 The Jordan side of the river has a wood platform with steps at either end for visitors to descend, just a few at a time, and dip their toes into the 10-foot-wide-water about which so many anthems and spirituals are sung. On the Israeli side, a skipping stone’s throw away, a 20-foot-long concrete slab with steps the length of the slab so many pilgrims may access the water at once. Each country's flag flies high. There is no sign of Palestine. 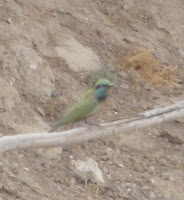 I was glad we were alone there, that no noise disturbed our reflections but the call of the rula bird -- a brave little lime green bird with turquoise scruff. (Do you know its English name?)

It was strange being so close and so far from “the other side.” No guards but our Bedouin soldier. A peaceful stream between “sides.” A place so heralded, lauded, prayed for and fought for. Just my daughters and me. And the soldier. And Emad waiting for his ride home.

Home is always the destination of the pilgrim.

Hi! We hear Amman is sweltering in a heat wave. We've got the same conditions in New Jersey PLUS humidity!

On Friday, 2 July, Katie and I landed safely at JFK Airport in New York City. Peter and Janna met us with open arms and brought us to our beautiful home in Maplewood, New Jersey.

We are glad to be here and we also miss our home and friends in Amman!

This is just a brief note to say we're fine. There is much more to come.

Posted by Anisa Mehdi at 4:30 PM No comments: 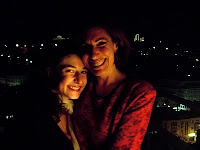 1 July 2010
“The next time I see a full moon,” I wrote on August 6, 2009, “will be in Jordan."
Peter, the girls, and I were on the beach in Old Orchard Beach, Maine. We’d booked two rooms at the Atlantic Inn for the night en route our summer home, still four hours north and inland. It was a spectacular sight floating over the Atlantic horizon and above the dunes and grasses of the Maine coast. It was quiet except for the rhythm of the waves and my heartbeat. What was ahead? Interesting that the full of August 6 was also a lunar eclipse – but we didn’t know or see it.
Eleven full moons were ahead:

(1) A Ramadan full, September 4, midway through the fasting month; just three days after we’d moved into our apartment. We broke our fast that evening with Dr. Younes Assad who became
friend, physician and grandfather these ten months. He took us to the Oriental Cafe on the road to Sweileh, overlooking a great valley with Amman in the eastern distance. In the valley between is the Baka Palestinian refugee city. We enjoyed a refreshing Mint-Lemonade with our iftar. Remind me to make one for you in Maplewood ...
(2) An Esalen full on 4 October when I was in Big Sur for the board meeting, and Katie and Peter were forging Wadi Mujib ...

(3) A Sisters moon in November at the reception for Directors of Admission for Wellesley, Smith, Mount Holyoke, Bryn Mawr, and Barnard at ACOR (American Center of Oriental Research) in Amman ...

(4) December’s first full was on the second, the day I delivered “Inside Mecca” with Arabic subtitles to Alain at Fulbright to give to Basma at the US Embassy (she has since become one of my best friends) to be ready for the screening of the film at the University of Jordan on the sixth ...
(5) December was a blue moon month. It’s second full was New Year’s Eve. We celebrated with Peter and Janna here and a party for our local friends ... 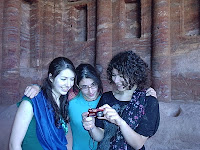 (6) Under January 30th’s full moon we took my niece Maeve Chandler to the airport after her ten day visit with us. She's on the left enjoying photos taken in the Soldiers Tomb in Wadi Firasa, Petra, with Katie and my first cousin once-removed, Nadia Mehdi, who also visited us in January from London ...
(7) In late February I was in Jericho – I know I didn’t tell you; I was saving that story as I saved the Jerusalem story, which is still an unfinished narrative. In Jericho, staff of the Abraham Path Initiative was meeting with its new Executive Director, Dr. Yunus Sola. I was honored to attend as both a board member and media strategist. In fact I departed Jericho and crossed back that barbed, desolate no-one’s-land late at night under that full moon. I was the only non-Palestinian at the border there so they let me ride the bus with the locals back home to Jordan. Usually we are segregated. You'll hear more in the upcoming "Pilgrimage: Part Two" ... 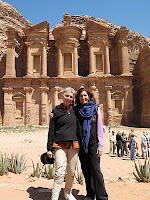 (8) The March full was at Petra with my dear friend Alyce Faye Cleese ... 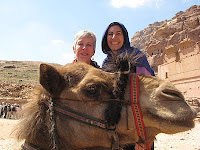 (9) On April 28 I gave a talk at Amman’s SAE – a training center for broadcasting and filmmaking ...
(10) Katie played Juliet, Lady Capulet, and Tybalt in the Modern American School’s drama club presentation on May 27. Need I say she was the most skillful actor on the stage and but for another boy who was a complete stage-hog, she stole the show ...

(11) June 26 we saw the full moon in Umm Sayhun, the Bedouin village above Petra where we had dinner, once again, on Ismail’s roof. This time it was Katie, Mark Tremblay and I. Mark was back on business. We went first to Karak Castle and then a farewell pilgrimage to Petra.

The next time I see a full moon I expect to be in Maplewood, New Jersey. Perhaps I’ll pack up from a day at the pool and grill some eggplant and then cook sweet sage tea – Bedouin whiskey -- in our backyard fireplace until the cheap metal pot turns black.

Posted by Anisa Mehdi at 7:00 PM No comments: