Here in Amman, Jordan I meet people every week who ask a question I’ve heard since girlhood: “Mehdi? Are you Mohammad Mehdi’s daughter?” From ministers to media

professionals, doctors and non-governmental activists comes admiration for this man who didn’t back down when times got tough. “I knew him in Beirut,” said one newsman. “He spoke for all of us,” admits a successful banker, “when we were too scared to speak up.”

When I was a little girl being known as Mehdi’s daughter had some unwelcome consequences. A teacher would ask “Are you –“ and then dock my grade because he didn’t like my father’s politics; the parent of a friend would say “Was that your father on television last night?” and warn her daughter I wasn't the kind of girl to play with.

Today is the 12th anniversary of my father’s sudden and untimely death. I was with him outside the Consulate of Saudi Arabia in New York City, picking up my papers for permission to cover the Hajj for PBS, when he was struck with massive coronary failure. It was over in seconds. But the impact of his passing continues daily, as I meet people who remember him, and as all lament the absence of his voice on the issue of Palestine.

Mohammad Taki Mehdi came to the United States from Iraq in 1949 to study at the University of California at Berkeley. “I was born in Baghdad and reborn in Berkeley,” he repeated to all who would listen. It was easier to say "Baghdad" than Karbala -- at that time rare indeed was the American who'd heard of Karbala. At least those who'd heard of Scheherezade knew of Baghdad. Now, one blessing of the cursed war against Iraq is that more Americans have heard of Karbala. Either way, back in the 1960s most everybody only heard my dad's criticisms of Israeli policy and thought he was anti-Semitic.

Dr. M. T. Mehdi is best known for his strong pro-Palestinian and anti-Israeli stance. He was a one-man public relations machine to whom all the New York press turned whenever violence broke out in the Middle East. He commented on Munich, Ma’alot, and the Marine barracks bombing in Beirut. He played a role in getting American hostages released from Lebanon. In 1988 he wrote Terrorism: Why America is The Target – five years before the first World Trade Center bombing.

He is less well known for running for the US Senate in 1992, becoming the first Arab American Muslim to run for federal office. He won 5% of the vote in New York State. Dr. Mehdi was the first American to petition the US Post Office for an Eid Stamp. He got the Empire State Building to go green in honor of Ramadan. He was the first to encourage other major public institutions, including the Port Authority of New York and New Jersey to acknowledge the accomplishments of Muslims by raising a crescent and star flag annually in December. In fact, the Port Authority raised this banner at the World Trade Center at his behest. A crescent and star is on the White House ellipse every year during the holiday season alongside the National Christmas tree and menorah representing the Jewish festival of Hanukah. He was the first Arab American to publish an English-language newspaper (ACTION) focused on American and Middle East issues, influencing the career choices of young Arab Americans. He was the first to face unfair deportation based on his pro-Palestinian politics and national origins.

In the time that’s passed since my father’s death, progress has been made in the vital mines of politics and culture that he forged nearly single-handedly. Today, Arab American and Muslim American organizations plow forward, holding conferences, raising funds, challenging the status quo. We hear annual Ramadan greetings from the White House and can purchase the beautiful blue and gold calligraphic Eid stamp. There’s still a long way to go in balancing American policy toward Israel and Palestine and in supporting the growth of democracy in Southwest Asia, but at least it’s on the agenda. Congressman Keith Ellison and others are urging President Obama to “ensure that the legitimate needs of the Palestinian population are met.” But people forget on whose broad shoulders they stand.

There’s no replacing the voice that always came on the radio and television after an explosion, kidnapping, hijacking or killing: a voice that came to put context and reason where only conflict and rage prevailed; a voice with rolling “r’s” and an accent echoing a boyhood in Baghdad and a manhood in Berkeley. A man who suffered for his convictions but never lost heart. He survived beatings, arson and threats to his family. He created a movement which lives on now in structured Arab and Muslim American organizations.

“Are you Mehdi’s daughter?”

One of those is the annual M. T. Mehdi Courage in Journalism Award. Last year’s $1000 prize went to Ray Hanania.
Posted by Anisa Mehdi at 8:38 AM No comments:

14 February 2010
February is tax time because Janna wants to transfer from Temple and all those college application documents are due March 1. Doing taxes, stressful as it may be, is always interesting. It's better than New Year's Eve for reflecting on the past and dreaming what's next. It's a chance to see how different one year was from the year before ... from a place in the next. From my rooster listening post in Amman, I see that numbers this year are different from last but also my ambition, lifestyle, productivity and opportunity. 2009 held a few consulting gigs, a few lectures, and the Fulbright. 2009 -- nice and quiet compared to the chaos and tumult of '08's Dubai escapade, and the Jordan TV documentary training program. The latter was prequel to my Fulbright work at Jordan TV this year. Fortunately Internet access is intermittent today and my tax documents are in a file in Maplewood so I'm on hold and in this break I can write to you.
It's been quite a while since I've posted. January was flush with family: Peter and Janna, then 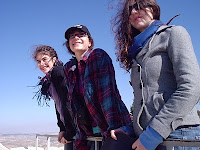 my cousin's daughter, Nadia from London, and my niece, Maeve from Canada. I'm not complaining about Petra twice in one month or revisiting Amman's non-tourist hotspots, like El Quds Restaurant for mansaf, or Habiba's for kanafe. Waiters at Hashem's recognize us by now and they really appreciate the 1/2 JD tip on the 4JD meal that leaves us stuffed with falafel and hommos. 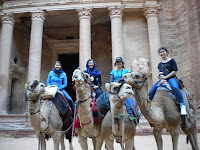 There's a clothing shop deep in the
old souk with great buys and
saleswomen who know Katie, at least, by name. Jafra DVD shop is now the balad's exclusive distributor of "Inside Mecca" with Arabic subtitles and I have enough copies to be generous. Moreover, I'm up to renting cars and driving. I'd promised myself I'd never drive in this crazy town. But it's not as crazy as Beirut; it's just a notch nuttier than New Jersey, really, and renting gives Katie and me more independence and reduced travel costs. Hey, how about the Dead Sea on Friday? 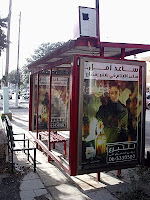 In early February I wandered around Shmeisani (that's our neighborh
ood) taking photos of what doesn't work about walking in Amman. Security guards got nervous at the bus stop on Mecca Street and at the unused amphitheater and abandoned amusement park under the rusted gondola on the other side of the hill. Taking pictures at the Citadel, that's one thing. Photographing a neighborhood is quite another.

Katie, Janna and I walk ed to the American Embassy in January to collect the "second" passports we applied for so travel to the western neighbor is on the horizon. That's a place where walking is prohibitive. Not only is the sidewalk blocked off but half the street. Armed tanks sit at each corner; military men patrol the length of the block. Pedestrians can't enter but for one spot between cement barriers. I am always saddened by the reality of this formal relationship. Still, nearly everyone we meet says he loves America; they don't even take the bait when I badmouth the Bush administration, although they smile when anyone says "Obama."
We hope to cross the western border later this month. A staff retreat for the Masar Ibrahim el Khalil comes at the end of February in Jericho. Katie and I will spend a day there after walking the Palestine path and seeing el Quds (Jerusalem). Being here has allowed me to play hard as a Masar board member. At the end of January I helped interview for the organization's new executive director. That process let me got to know Susan Collin Marks of SEARCH for Common Ground. 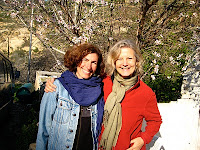 She introduced ed me to an expanded concept of tribe -- one that goes beyond DNA, geopolitical borders, and may stretch throu
gh centuries. You know what it's like to meet someone and feel an instant connection, an ease of relationship, a comfort and intimacy that firstcontact ought to preclude -- but it's there. That could be a member of your tribe-by-designation, not by birthright. Coming from a small family with it's count us on two hands and two feet members scattered across the globe, the notion of belonging to something bigger, deeper, pre-destined and chosen, shook me. It brought me to tears. You members of my tribe reading this, you know who you are.
The Masar here in Jordan is feeling growing pains right now. This weekend a delegation of prominent guests from the Global Philanthropists Circle came for a walk and an overnight. These were pretty big players staying in some pretty humble homes. Reports are all of graciousness, gratitude, and good food. Katie and I are getting to know this Jordanian back woods pretty well. We're pointing out the ruins of the Ottoman irrigation aqueducts and flour mill, the pomegranate and fig trees. We know Abu Ibrahim, the region's mayor, and Um Ahmad, Um Ihab, and so many other Mothers-Of, who cook, bake, jar, and make goods for sale to the increasing number of visitors who walk the trail from the Soap House of Orjan to the remains of the Church of St. Elias (Elijah) on the highest hill above the towns of Al Ayoun, Orjan, Baoun, and Rasun. Women are the engines of economic opportunity here. Pilgrims on the Masar are fuel.

February promises to be full of activity beyond the Masar adventures. For one, I'm on another film project. For another, Jordan Television is undergoing a major shuffle, with the Director General summarily ousted a few weeks back and the aftershocks still coming. I don't know what my role will be there in the near future. And the college applications must be completed. I am not welcoming the return of multitasking. It will be interesting to see if juggling skills return like riding a bike.
Posted by Anisa Mehdi at 2:02 AM No comments: