LETTER XXIII: If it's Thursday it must be Cairo 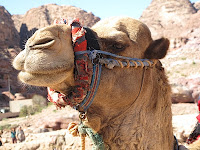 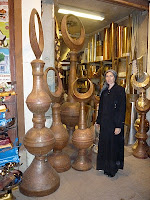 We were mighty sad to lose those photos but not at all disappointed with our Egyptian experience (except for missing our friends Neil and Trudie Prior there by about 10 hours!). Sufia Lodhi and Yasir Khan (his name is Khan and he is not a terrorist; he is broadcast journalist and involuntary comedian) welcomed us to the guest room in their lovely Maadi apartment. Katie and I had the honor of being the last guests there before they move to Doha, Qatar, where Yasir is starts a new job with Al Jazeera. After he worked on my “Inside Mecca” team, Yasir took a position at the American University of Cairo. Lucky students. Sing to the class if you’re late. Cell phones confiscated if used. Failing grades given as deserved. And a hell-of-an education in production.

Katie, Sufia and I prayed ‘Asr at Al Azhar that Friday. ‘Asr is the afternoon prayer, not the big crowded congregational prayer that so often is filmed for news reports to fill in video during stories about acts of violence committed by Muslims. The women’s section at Al Azhar was crowded but not stifling. Most importantly, Katie and Sufia talked about religion and faith and the inconsistencies of the twain and practice. Sufia was banished from Islamic “Sunday school” in St. John, New Brunswick, Canada, for asking too many questions; Katie keeps her mouth shut and is getting “A”s in her religion class at Modern American School. But they have the same concerns, mostly to do with hypocrisy, priority, patriarchy, and complacency. I am glad Katie has another adult to hear her. She is blindingly brave, innocently courageous, subjecting herself to the contrary lessons of theoretical Islam and its manifestations. One day she will see, insha Allah, how this experience sharpened her wit and wisdom; meantime she either suffers in silence or has transcendent moments with people like Sufia or her English teacher, Ms. Aisha. Ms. Aisha is Welsh. She told me, “If I’d come to Jordan before embracing Islam I’d never have become Muslim.”

God bless them all.

Posted by Anisa Mehdi at 9:02 AM No comments: