Amplifying the Voice of Muslim Women: A Review of Brigid Maher’s “Veiled Voices”

“Veiled Voices” is a film filled with loud, bright stories that enlighten an audience in need of authenticity about Islam in general and the lives of Muslim women in particular. Brigid Maher, director, cinematographer and editor, shows sensitivity and skill in bringing these critical-yet-simple stories to light.

Simple? Yes. They are stories of the woman next door: a neighbor who is a mother and wife; a professional who teaches and travels; an individual facing challenges and disappointments who does not yield to inaction but rather overcomes and inspires. These stories unfold gradually as they weave together across borders.

Maher profile s three women: Huda Al Hasbash from Syria, Suad Saleh in Egypt and Ghina Hammoud of Lebanon. These stories are woven together, each round deepening the contours of their lives. We meet them first as professionals, then as wives or divorcées, then as mothers and cooks, balancing the many duties women have worldwide. We meet their husbands, mothers and children. Each round widens the panorama of women’s experience in these Arab and Muslim-majority countries.

Syrian mother and educator Al Hasbash defends wearing a headscarf and goes on to demonstrate that there need be no conflict between wearing a scarf and living a modern life. She teaches dozens of women not only to read Qur’an, but to know their rights. And she sizzles up a fine looking meal for her family while she’s describing her views to camera.

Dr. Saleh is a very public person, teaching at Cairo’s Al Azhar University and appearing on television call-in programs. “We have reduced Islam to a veil and a beard,” she laments, when there is so much more. Having reported on Islam and Muslims for 20 years I confirm her complaint. This is a problem perpetuated in part by Muslims themselves.

Hammoud bravely sticks with her career in spite of betrayal by her husband; she keeps the affection and respect of her daughters who lived with their father after the parents divorced. Students deeply appreciate the model she provides.

Relationships between women and men are good examples of ongoing stereotypes. Due in part to mainstream media, pop culture, and ignorance, a prevailing view is one of oppression of women. We read of “honor killings,” of girls forbidden to go to school, and women prevented from divorce in unacceptable situations. None of these is permitted in Islamic law, even if culture in some Muslim-majority countries turns a blind eye. We feel for Ghina Hammoud who suffered years in an abusive marriage. In contrast, Huda Al Habash’s husband Samir Khalidi is the picture of an ideal partner. He appreciates and supports her calling and is helpful at home, clearing the table and going over homework with one of their sons. Dr. Saleh notes that while she may be qualified to sit on Egypt’s higher Islamic council, the reality is that the men who have the vote will not receive her. Susan B. Anthony had to struggle, too. Without a cudgel, Maher hammers home the point that Muslim women have rights, can be self-expressed, and like their sisters around the world, must overcome hurdles in their lives to accomplish their goals – even if that means redefining their goals along the way.

Some of the footage in this hour-long documentary will surprise viewers. There are rooms full of women studying Islamic law and leadership. They refer regularly to early examples of female leadership in the Muslim community, including the example of Aisha, youngest wife of the Prophet Muhammad. At 17 she was already an acknowledged scholar and teacher. The filmmaker does not impose heavy control on situations, allowing the natural interruptions of life to play out on videotape. A child fussing off camera is not quieted and the interview continues; when a particularly personal question is posed and the subject cries the crew cries too. This is noted and we, the audience, are privy to a behind the scenes moment.

Brigid Maher teaches in the Film and Media Arts Division at American University in Washington D.C. “Veiled Voices” builds on her favored genre: issues of cultural identity and discrimination.

Muslim and non-Muslim women from Malaysia to America are actively engaged in educating themselves and others, leaning on religion as the primary tool in an unwavering call for equality and opportunity. Like the efforts of Azizah al Hibri in Richmond, Virginia and Zaina Anwar in Kuala Lumpur, the women in “Veiled Voices” are part of a necessary and natural movement to amplify understanding of Islam in the 21st century.

Anisa Mehdi is a Fulbright Scholar in Jordan. She is a journalist and filmmaker. Mehdi produced and directed the National Geographic Special “Inside Mecca,” and was executive producer of the PBS Frontline documentary, “Muslims.” www.anisamehdi.com

Letter XXII: Notes From the Field (with unrelated photos)

Seven months into this adventure it’s no big deal to ride a taxi in Amman. I take one or two a day, it seems, getting from home to the balad (downtown) or taking Katie to City Mall (the new fancy one in town, just a step down from Dubai). A cab’s a cab once you can tell the driver where you want to go, and I can. I can even give short cuts and scold them for going the long way around or heading straight into traffic at a certain time of day. Everyone knows Shmeisani bottles up after three pm. Many of our Ammani cabs are shabby. The upholstery is torn, seats ripped, seat belts don’t work and the space reeks of cigarettes. 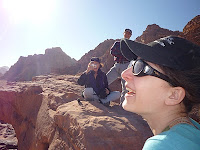 But there are advantages to cabs here over the cabs back home. In addition to the unreasonably low fares, there is no barrier between you and the driver. There is no slot through which you side your money and awkwardly wait for change to pass back. You hand the guy the dinar. He hands you change. Today I even offered the driver some fresh hot “taboon” -- bread I watched bake at a smal shop near Jordan Television and now carried in bulk home to share with Katie. As a good Jordanian he said “no” the first couple of times. But at the end, just before I hopped out, I tried again. “T’faddal.” He smiled and broke some for himself. 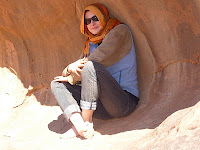 But just in case you haven’t the time and you gotta have java, here’s how drive-through works in Jordan. You pull up to the side of a street near a coffee stand set back from the curb. Roll down your window and shout to guy “I want one black coffee and one medium.” A few moments later someone comes to your car, cups in hand. You hand the guy the dinar. He hands you the change.

Every day is prom day at the beauty salons of Lebanon and Jordan. (They are the only ones I’ve been to on this sojourn so my reporting is limited.) On the outside they may look differently: some have entrances off dusty streets, some are in sleek, marble hotel lobbies. But inside, salons sound and smell alike. They hum. They reek of spray and lotions. And they share an intense commitment to vanity.

“Make it a deeper black.”

“Make it a tawney brown.” 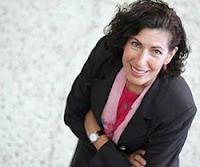 These days I primp myself before going to get my hair cut -- just to have a little dignity on the playing field. Sometimes I think I’m ready to go, even pretty, with my hazel eyes, curly hair, and very present eyebrows. Add a touch of lipstick and voila! Then I walk into, say, Tareq’s Salon in Abdoun, a shop buzzing with blow driers, pulsing with funky music, and filled with real Arab women. Dark eyed black haired drop dead beauties with L’Oreal locks and come hither curves topping spiked heels and tight jeans. Suddenly I’m plain, unkempt, and common: the only adult woman in the room with natural eyebrows and flats on her feet.

And just about the only one with a smile.

Posted by Anisa Mehdi at 7:11 AM No comments: