Muslim journalist: ‘Use our common ground’ 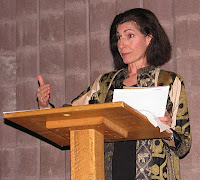 A Muslim journalist called on a Jewish audience in Livingston to “use our common ground as Muslims and Jews to make something positive in history out of something others will certainly use to spew hate and fear.”

In an hour-long address, followed by a half-hour question-and-answer period, the award-winning reporter and filmmaker suggested that Judaism and Islam, as well as Jews and Muslims, had much in common despite centuries of hostility.

“Back to the basics,” she said. “Adam, Noah, Joel, Jonah, Abraham, Isaac, Joseph, Moses, Aaron, Isaiah, Elijah — all of these are considered prophets of Islam to Muslims and they are all mentioned in the holy book, the Koran…. We share values of education and respect for our parents, giving charity, and fasting.

“Islam, like Judaism, is a system of laws and rules — some of which we wrestle with, some of which we take at face value, and some of which we need to reinterpret so they are relevant to today,” she added. “The Protestant Reformation took a long time and was very bloody. I’m not sure this will be any different.”

Venturing into what she called “tricky territory,” Mehdi spoke of historic violence between Jews and Muslims.

“We have the right things and the profound faith that we share, but we also have very complicated politics, and these are the things that need to be discussed,” she said. “We have a long history of compatibility.”

She referred to the “great poetry, mathematics, exploration” by both Jews and Muslims in medieval Spain, as well as persecution and banishment by the Catholics during the Spanish Inquisition.

With the 10th anniversary of the 9/11 terrorist attacks coming up in September, she suggested a new Muslim-Jewish alliance in America “to create a productive future. We need friends,” she said.

“We can use your support because you know what it is like to be persecuted and to be a minority that is unfairly targeted.”

After her talk, Mehdi fielded questions about what some audience members suggested was a dearth of moderate Muslim voices.

“My heart breaks when I hear the anti-Muslim sentiment in this country,” said one woman in the audience. “Why aren’t there more moderate Muslims speaking out against some of the things that fundamentalists do and say?”

“Why does it seem like we don’t hear from these moderate Muslims?” interjected Rabbi Clifford Kulwin. “Is it that we are not hearing, or is it because it is not happening?”

“It is there and we’re not hearing it,” Mehdi insisted. “Every time there is a suicide bombing in Iraq on the Muslim side or in Israel, where Jews die, there are condemnations of that act of terrorism by imams and leaders of Muslim civic groups and individuals. They are automatically and regularly condemned, these acts of terrorism,” but mostly ignored by American media.

Later, in an interview with NJ Jewish News, Mehdi acknowledged that tension between Palestinians and Israelis “has been a biggie and will remain until there is a solution.”

“Will we ever see a solution?” she was asked.“Absolutely. I think it might be a two- or three-state solution with Gaza, the West Bank, and Israel, not because of political differences between Hamas and Fatah, but because they are geographically separate — unless there is a giving of territory that connects Gaza and the West Bank.”

Her tone was optimistic.

“It will eventually get better. The Hundred Years’ War ended. We are now allies with Japan, even if the United States committed the worst act of terrorism and the only act of nuclear assault on this planet,” she said, referring to the World War II bombings of Hiroshima and Nagasaki. “Anything is possible.”

Mehdi, whose reportage specializes in religion and the arts, has appeared on PBS’ Frontline, ABC News’ Nightline, and National Geographic Special. She is a resident of Maplewood and a flutist with the Livingston Symphony Orchestra. 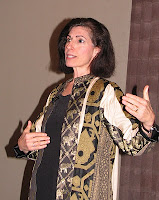 One subject that was not raised at Anisa Mehdi’s March 22 appearance at Temple B’nai Abraham was a “courage in journalism” award her family presented to veteran White House correspondent Helen Thomas.

The $1,000 prize was given to the 90-year-old Thomas at a Nov. 18 dinner organized by the Arab-American Anti-Discrimination Committee.

“The story of Helen Thomas, like my father’s, is one of integrity, vision, boldness, and unflagging determination,” Anisa Mehdi said in an AADC release announcing the award.

The event took place six months after Thomas said in a videotaped interview at a Jewish American Heritage Month celebration at the White House that Jews “should get the hell out of Palestine” and “go home” to Poland, Germany, and the United States. The comments cost the Lebanese-American reporter her job as a columnist for the Hearst Corp.

Mehdi’s family and the AADC presented Thomas with the 2010 M.T. Mehdi Courage in Journalism award after Thomas wrote that “I deeply regret my comments” and before a Dec. 2 speech in which she said the White House, Congress, Hollywood, and Wall Street “are owned by the Zionists.”

Asked by NJ Jewish News why her family presented Thomas with an award months after the correspondent made comments many considered anti-Semitic, Mehdi responded in a March 29 e-mail: “The Mehdi family honored Helen Thomas…in recognition of her long and laudable career in American journalism. Her personal comment at the White House Jewish Heritage Celebration last May does not invalidate 57 years of superb, professional journalism.”

Rabbi Clifford Kulwin of Temple B’nai Abraham said he had not been aware that Mehdi’s family had presented the award to Thomas.

“I don’t know if having this information ahead of time would have altered our decision to invite her,” said Kulwin. Nevertheless, he said, Mehdi “was informative, engaging, and absolutely thought-provoking. In any case, when we invite somebody to Temple B’nai Abraham to speak and share their views with us, we don’t require or expect that everything they say will be pleasing to our congregation. That is not how one learns.”

Posted by Anisa Mehdi at 1:13 PM No comments: 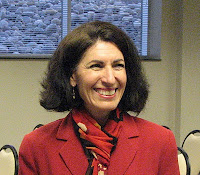 My March 1 keynote address for Women's History Month is now a podcast of Raritan Valley Community College. You can hear it here: Will the Revolution be Feminized? Arab and Muslim Women in the Public Sphere.
Posted by Anisa Mehdi at 9:17 AM No comments: